What's in a name? Well, if your name is Kurt and you play for the Knights, a great deal it seems.

Kurt Mann seems to be admirably fulfilling the legacy left by Kurt Gidley at the club.

Mann is the new version of a "Mr Everywhere", "Mr Fix-it", "Mr Versatile" that Gidley lived and breathed during his 13 seasons as one of Newcastle's most valuable assets.

The only position Gidley didn't play in the backline was wing. Fullback, centre, five-eighth and halfback he played many times – even threw in half-a-dozen games at hooker.

Mann in just 38 games with the Knights since the start of last year has played all of the above AND wing in two games last season.

The elimination final against the Rabbitohs at ANZ Stadium on Sunday will be Mann's eighth game at hooker, even though he trained at five-eighth all through the pre-season.

"I've sort of been that anywhere role with all the injuries we've had," Mann told NRL.com.

"It's just the way it's gone with others going down.

"It has shown the resilience of this group that we've been able to get on with it even though we've had a very tough ride with all these injuries throughout the year and in key positions.

"I've been more than happy to play my part."

Mann has not only remained upright but is showing his intrinsic value like his namesake Kurt Gidley.

"It must be the name," Mann said smiling.

"I was here in 2011 and I used to idolise Gids. He was probably their marquee player back then and I came here as a young kid.

"Fortunately I got some time with him and I actually roomed with him this year over at the Nines. So I learned a lot off him then too, especially how much this football club means to all the people in the area and not just the players."

When mid-season signing Blake Green tore his ACL, it was expected Mann would revert to the No.6 jersey he wore prior to his arrival and coach Adam O'Brien would hand of the rising players like Phoenix Crossland or Chris Randall the No.9 jersey.

"I did have a bit of a chat to Adz about it but we still had six or seven games left and we agreed it was a big ask to have two young blokes out there to play big minutes in those big games and get through uninjured themselves.

"As you've seen over the last couple of weeks Randy has been massive and it's great to see someone who works so hard reap some rewards. Did you notice he was the last man out on the field after training today doing some extras?"

NRL.com did indeed notice Randall chatting and working with Jayden Brailey, who is three-quarters of the way through his rehab after an ACL tear in round two after signing for 2020 from the Sharks.

Brailey played finals in all three years with Cronulla and is one of eight Knights players with playoff experience under their belts.

Another working with Randall was Andrew McCullough, who is on the road back after surgery to re-attach his hamstring. He has played finals with the Broncos in five of the past six years.

Mann says the doubters over the Knights' chances against South Sydney don't see all the behind-the-scenes stuff like Randall's extra work.

"Everyone has written us off virtually so we can just go out there and give it a red-hot crack.

"Don't forget we've got a couple of blokes who have played grand finals, and a couple who have won grand finals so I wouldn't say we're short on experience."

Mann also played finals at the Storm and at the Dragons before reuniting with the Knights. 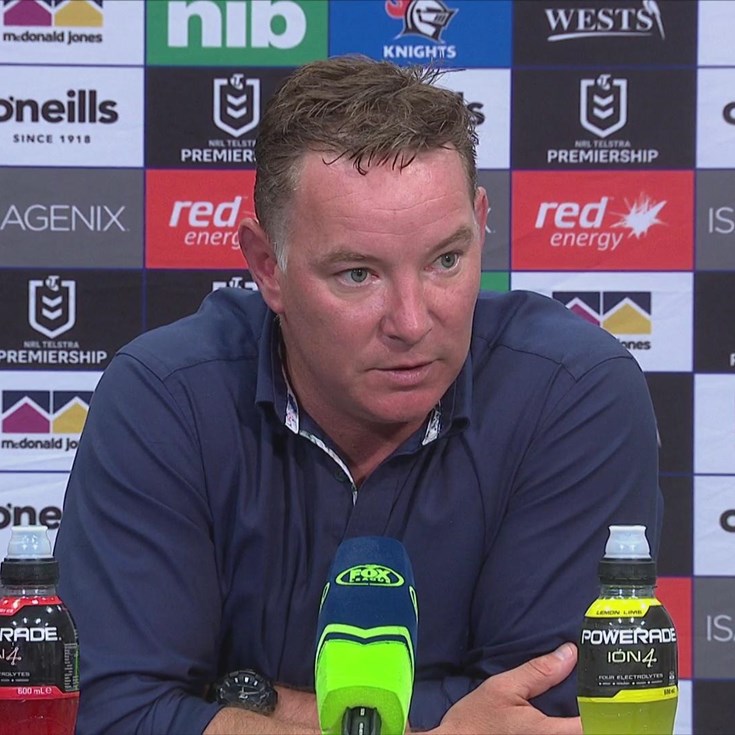 Highlights: Focus turns to finals as Broncos hold off Knights

Competition for spots 'bringing out the best' in Shibasaki