Veteran hooker Andrew McCullough says the Knights pack is setting the platform that will help the playmakers with their last-tackle options.

Newcastle's struggles in attack was the major talking point out of the side's loss to Parramatta last week but veteran rake said the issues weren't around their ability to get into "good-ball" territory.

The Knights threw everything they had against a gritty Eels defensive line but their final options at the end of sets left a lot to be desired.

The lack of execution from the side's playmakers led to Knights coach Adam O'Brien admitting the side hadn't worked as much on their efforts with the ball after conceding 32 points to the Cowboys in round seven.

Newcastle sit behind the Roosters and Eels for the highest yardage averages heading into round 10 with starting props David Klemmer and Daniel Saifiti leading the charge.

Players' Poll: Is there enough talent to expand to 17 teams?

Their efforts after nine rounds in three categories – all run metres (third), post-contact metres (third) and supports (first) – are keeping them in most games and are among the club's best results since their last finals appearance in 2013.

"It's a simple game sometimes, you've just got to run hard and tackle hard," McCullough said.

"I think we've been doing that well through the middle [but] we've just got to make sure we polish off our end of sets better to give ourselves a better chance after all the hard work.

"It [certainly] makes life easier when those boys are rolling over the advantage line."

Andrew McCullough on the Knights pack

"I don't think our attack was as bad as everyone's thinking," Hunt said.

"We just had to ice it at the end. It's more execution – if one person's that bit deeper or our catch-pass was a bit better we would've iced our tries.

"It's little fine details that if we can get right we'll score tries. In most of the competitions over the last 20-30 years, the best defensive team wins the comp.

"We [haven't been known] as a defensive side so that's our main goal first. If we can get our defence right our attack will flow … it will come."

The Knights will be without Daniel Saifiti for an indefinite period after the in-form prop suffered a knee injury last week.

Twin brother Jacob Saifiti will replace Daniel in the starting line-up on Saturday, while the Knights will welcome back Connor Watson and Mitchell Barnett from long-term injuries.

"Tex Hoy has done an unreal job and everyone who came into the team during injuries but Connor is an energy ball," Hunt said.

"You give him a centimetre of space and he'll find his way to bounce off 10 players and find his way over the line.

"I'm excited for him and especially Barney, he's our big enforcer. He's like a bull ready to go crazy every time."

McCullough was confident the return of Watson wouldn't affect his minutes at dummy-half after playing every minute of his six appearances in red and blue since joining the club in May. 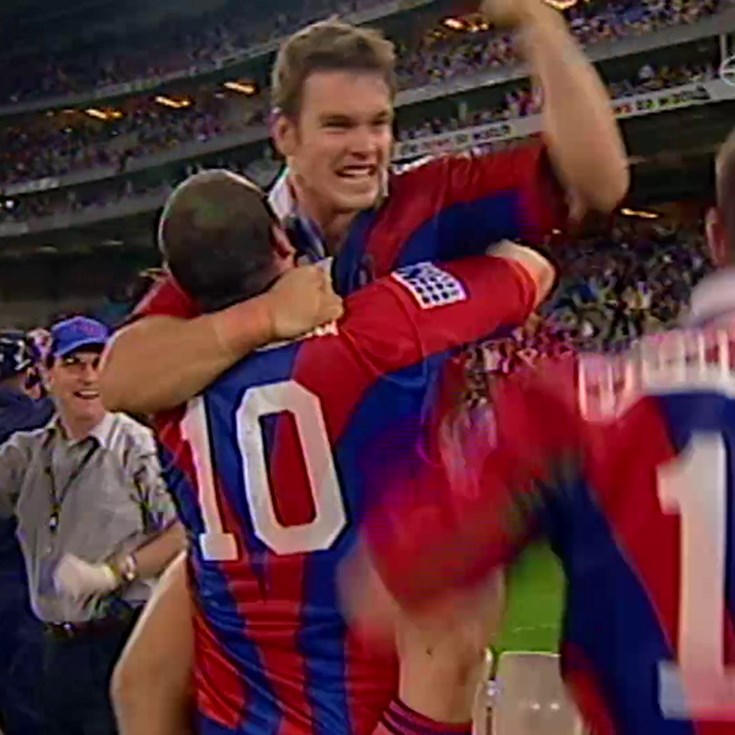