Daniel Saifiti sits just 80 minutes away from spearheading a NSW Origin series victory with memories of sky blue snubs as a junior and Brad Fittler's personal challenge still burning for the rising prop.

Saifiti is set to start alongside Knights teammate and mentor David Klemmer at ANZ Stadium, leading the Blues' bid for back-to-back series wins from the first carries of the game.

Newcastle's struggles through three consecutive wooden spoons saw Saifiti and twin brother Jacob fast-tracked into first grade at the age of 20, a debut Daniel concedes came too quickly in a struggling pack.

That rise was in stark contrast to his formative years as a teen, when the Saifiti boys were signed to the Knights by renowned scout Peter Mulholland in the face of interest from St George Illawarra.

Despite towering over junior opponents and tipping the scales at over 100 kilos at the age of 16, neither Saifiti brother could produce a chin-up when they joined Newcastle, prompting an intensive transformation under the club's then-strength and conditioning coach Mick Reid.

As Saifiti grafted away at his diet and training, he copped an added sting each and every time a NSW age-group team was announced.

"Sixteens, 18s and 20s I missed out on all of them. I'm still filthy about it," Saifiti laughs in NSW camp.

"No, it is what it is, I'm here on the big stage now so I'm happy with how it's panned out. It drove me a bit, missing out on those rep teams as a kid.

"Growing up, both Jacob and I didn't get a look-in, we didn't play NSW at all.

Blues on the psychology of preparing for the Origin decider

"Some of the players that played in those teams are playing grade now like (Rabbitohs prop) Junior Tatola and (recent Wests Tigers debutant) Oliver Clark, they're very good players now and they were back then.

"Something like that, missing out and having to work a bit harder, it does make this that little bit more special.

"I can see why I wasn't picked. I reckon I was a bit delusional back then, I wasn't working hard enough.

"The first taste of any of the rep stuff came in the last two emerging camps. I sat down with Freddie in both and he told me he liked the way I play and he could see me being a future Origin player.

"Coming from the head coach, that was pretty cool and a big boost for me."

Saifiti cracked a regular starting spot for the Knights as soon as his second season of first grade rolled around, impressing the right people as Newcastle slowly improved as well.

DCE: One game won't define me

But when Saifiti returned for his second NSW Emerging camp under Fittler last December he called out the obvious; Nathan Brown's big moves at market could put Saifiti's immediate career prospects in jeopardy.

With David Klemmer, Tim Glasby and James Gavet all signed to shore up a Knights forward pack that had been bullied for too long, Fittler urged Saifiti to take the prop purchases to heart and fight for his starting spot.

"Freddie said to me straight up that Newcastle have gone out and signed three very good middles," Saifiti says.

"That's my position and they've brought in three props so he said I should be taking that personally.

"I definitely see why Browny went out and bought those guys. We've been getting dominated in the middle for three years.

"I had a starting spot for those three years, but dropped back to the bench when those guys came in.

"It wasn't unexpected but I had to fight back to get that starting spot for Newcastle.

"I took it personally. But at the same time Klem, Timmy Glasby and Jimmy Gavet are really good guys and very good footy players.

"They're easy to learn off and I'm very grateful they came to the club."

After a knee injury Saifiti first feared to be season-ending was overcome, he reclaimed his starting role in red and blue by round seven.

His battle with the Burgess twins, a week after more than matching the Roosters big men, put him in the frame for an Origin call-up with Klemmer sidelined by a broken wrist.

Now the pair will combine in the Blues Origin engine room, the first pair of Knights props to play in the same NSW 17 in the club's 31-year history.

"Big Klem has come in and shown me the ropes, he's been so good for me since coming to the club," Saifiti says.

"Right from the start he's been saying 'follow me and I'll help make you a rep player', which is pretty cool to have someone care that way about you and believe in you.

"It's going to be unreal to do it together, now we've got to get the job done." 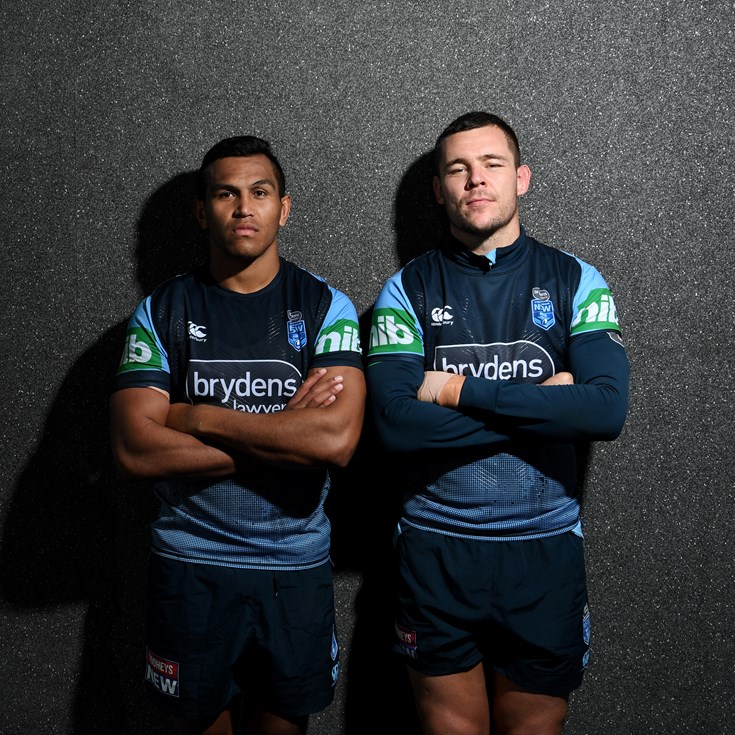