For the first time this season the Club is set to play back-to-back home games.

Following the disappointing loss to the South Sydney Rabbitohs, the nib Newcastle Knights now come up against a wounded but dangerous Penrith Panthers side in Indigenous Round.

After a subpar performance last Friday night, coach Nathan Brown hasn't held back with the changes this week.

Jacob Lillyman, Jack Cogger, Jacob Saifiti and Jamie Buhrer are either out or on the extended bench, with a handful of younger players into the side.

Brock Lamb, Josh King, Danny Levi and Luke Yates all played plenty of first grade last year, but have spent the majority of 2018 waiting in the wings so far.

They will all be desperate to make the most of this opportunity, with Brock Lamb a notable inclusion following his demotion to Reserve Grade a couple of weeks ago.

His kicking game in open play as well as from the tee should put him in good stead in a team that has visibly struggled in that department since Mitchell Pearce's absence.

The Penrith outfit have one of the longest injury lists in the competition at this stage of the season, with Nathan Cleary, Josh Mansour, Dylan Edwards, Sam McKendry, Moses Leota and Tim Browne unavailable.

And while Trent Merrin was named in the squad on Tuesday, the Panthers have admitted he could very well miss the game as he recovers from surgery on a compound dislocation of his finger.

The Knights have had as many injury troubles as any club out there over the last few years, but travel into this game with a relatively clean bill of health when discounting the long-term injuries of Pearce and Tautau Moga.

Despite the Panthers' disadvantage in the injury stakes, they are set to field an imposing forward pack and one of the best halves in the competition in James Maloney.

But when it comes to player interchanges, it looks like the Knights have a big advantage in the experience department.

While the Knights have scored first points in every match that they've gone on to win so far this season, the red and blues have also been guilty of some slow starts.

And they didn't get any slower than against the Rabbitohs, when they conceded two tries in the first five minutes.

The Panthers have moulded themselves into the comeback kings so far in 2018, as on multiple occasions they've conceded plenty of points early on only to fight back and snag a win.

They couldn't quite get that done against the North Queensland Cowboys last week when they found themselves trailing 20-4 at half time in Bathurst.

The final score was 26-20 to the Cowboys, but the Panthers again demonstrated how dangerous they can be when coming from behind.

Coach Nathan Brown will be keen to capitalise on the Panthers' slow starts in front of a home crowd, but the team will have to be wary of a very dangerous attacking outfit if they do manage to get themselves in front. 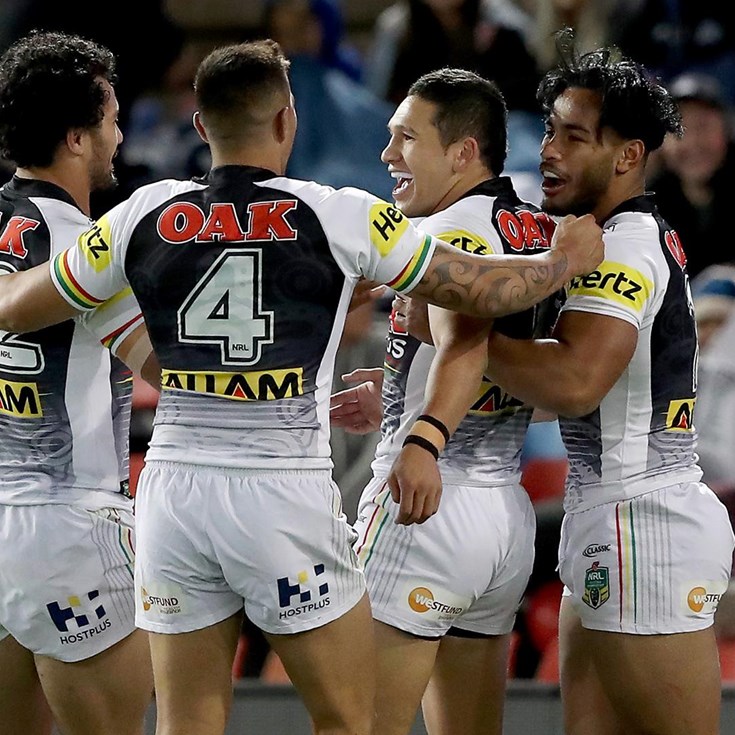 Guerra looking to own middle

Watson playing for those less fortunate