Rugby League has been built on tribalism and representing your town and your colours.

From such stoic traditions, fierce rivalries have been forged by competitors battling it out for supremacy.

The nib Newcastle Knights will face one of their arch rivals in the Manly Sea Eagles this Sunday at McDonald Jones Stadium in Indigenous Round.

From the incredible games of the late 80's to 90's, the running battles between Paul 'The Chief' Harragon and Mark 'Spud' Carroll and a famous game in 1997, Newcastle and Manly have built an intense rivalry.

In this edition of Rivalries, we take a look back at a select group of classic games between the Knights and the Sea Eagles ahead of Round 12.

Here is our Top Five encounters:

In the inaugural season of the Newcastle Knights, the two sides met on three occasions heading into the final instalment in Round 19 of 1988.

The two sides had traded victories in the previous encounters to set up a huge clash in Newcastle.

The brutal clash at Newcastle International Sports Centre was played in front just over 23,000 on a Sunday afternoon.

No tries were scored in the first half as the two forward packs including Marc Glanville, Tony Butterfield and a young Paul Harragon for the Knights went toe-to-toe with Paul Vautin and Noel Cleal for Manly.

Tries to Des Hasler and Michael O'Connor in the second half awarded Manly the win in a grinding affair.

Manly went onto finish fourth while the Knights ended their season in 14th.

Fast forward to the most memorable day in Newcastle Knights history so far.

The Knights had endured six straight defeats against Manly heading into the 97' decider and only one win in the previous 12 matches against the arch rivals.

Many Knights fans will remember every second of one of the greatest Grand Finals in modern rugby league history.

However, it will be long remembered for Darren Albert's try in the final seconds to achieve a maiden premiership for Newcastle.

This incredible match had assured that the Newcastle against Manly fixture will serve as a monumental encounter for many years to come.

In the season of 2014, the Knights and Sea Eagles played out a thriller at Brookvale Oval.

With only two wins in the opening nine rounds, Newcastle were heavy underdogs against a red-hot Manly side at their home ground.

The Knights, however, fought hard and got off to great start with Akuila Uate scoring early.

Uate had a second try early in the second half to extend the Knights lead.

Jorge Taufua pegged one back for Manly before Dane Gagai swiftly replied with an intercept try to stretch the lead out to 14-4.

Two manly tries with eight minutes to play brought the team level before Daly Cherry-Evans slotted a field goal with one second to play to achieve the victory for the home side.

The Sea Eagles went onto finish second while the Knights ended 2014 in 12th.

Moving forward to 2018 and the Knights would have their own thrilling one-point victory courtesy of our No.7.

In the opening game of the season for both sides, the two teams played out a classic game to kickstart the year at McDonald Jones Stadium in front of a strong 23,516 crowd.

Mitchell Pearce and Kalyn Ponga were making their debuts and it was Ponga who showed his worth instantly scoring his first try for the Club with a trademark goose-step in the 4th minute.

The two teams traded tries before half-time with the score set at 12-12.

Manly scored first after half-time before Lachlan Fitzgibbon got the Knights level with a barn-storming try.

A penalty goal to Manly sent the game to extra time and up stepped the man-of-the-moment, Mitchell Pearce, on debut booted a field goal to win the game for Newcastle.

In the latest game between the two clubs, the Knights and Manly played out a highly-entertaining battle in the latter stages of the 2020 season.

A see-sawing affair took place at McDonald Jones Stadium as the side traded leads before the Knight nabbed the two points in the final stages.

Manly shot out of the blocks to lead 12-0 before Starford To'a burst onto a ball and scored for the red and blue shortly after.

Kurt Mann had the side level burrowing over close to the line before acrobatic work from To'a found Enari Tuala who scored on the brink of half-time.

Manly responded with two successive tries after the break to take back the lead and put the score to 24-20.

The Knights would have two tries denied in pursuit of the match winner before Tuala stepped up, running onto a beautiful Kalyn Ponga pass to score the decisive try.

The Knights would claim a memorable 26-24 win over the Sea Eagles. 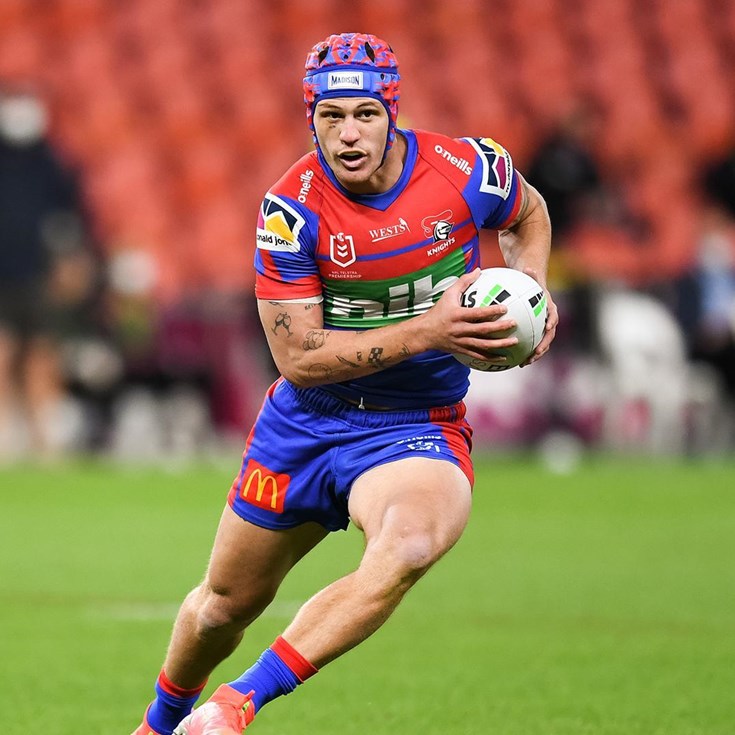