Kalyn Ponga has declared he wants to be like Maroons legend Johnathan Thurston and explained why he feels like a fully fledged Queenslander.

The 21-year-old recalled watching the Maroons in awe of Thurston's magic during the Queensland glory years and how he sought his family’s blessing before committing himself to the state where he spent most of his teenage years after leaving New Zealand.

Ponga would watch Origin with his family, including an uncle who supported NSW, with eyes glued to Thurston’s every move. He then spent several seasons at the Cowboys learning at the master’s feet.

"I remember being a really young fella and my uncle supported the other team," Ponga said.

"I remember being around my old man [Andre] and cousins and watching [Origin]. Growing up in Queensland you get immersed in the culture.

"I remember watching JT a lot. I’d watch JT and how he worked off the ball. The work that he did off the ball was inspiring. It is hard to do, but that is what I want to do.

"JT is one of those blokes who doesn't know what he is going to do, he just does it. Learning from him, I was just watching what he was doing rather than him telling me. He is just a freak and does things off the cuff.

Ponga, who will play just his third State of Origin game for the Maroons in Perth on Sunday, was in the New Zealand Kiwis’ sights in 2016 after playing two finals games for the Cowboys.

"I remember when I was young, when I played my second NRL game, the Kiwis wanted me to go into camp and go on their tour and, based on form, I'd only played two games and I didn't deserve to go," he said.

"I remember having a chat with dad, but I wanted to be picked for a team in the future based on my form knowing that I deserved to be there, not just because someone wanted to snatch me up.

"It would have been easy to pick New Zealand, but I didn't deserve it."

Due to his family connection to New Zealand, a teenage Ponga consulted those closest to him before pledging his allegiance to the Maroons and Australia.

It was a decision he made based on his own sense of belonging and connection to Queensland.

"I had to ask my dad and my uncles and get their permission. I always wanted to play for Queensland,” he said.

"I always felt at home in Australia and wanted to wear the Maroon jersey, but I had to make sure that [family] was right with it and they were right with it. I wasn’t torn. I have a lot of family back in New Zealand and I wanted to make [dad] proud and them proud, and I am doing that now."

It emerged recently that Ponga had fielded a call from Wallabies coach Micheal Cheika to gauge his interest in switching codes and playing rugby union professionally, a sport he played at school in Brisbane.

"That was ages ago. I don’t want to touch on [rugby]. I am here to focus on Queensland and the week that is ahead and the game that is ahead," Ponga said.

In a warning to the Blues, Ponga insists he can improve on his performance at Suncorp Stadium where he delivered two superb cut-out balls to inspire the Maroons' 18-14 win. He is also aiming to build on his combination with five-eighth Cameron Munster.

"I am very excited. I can’t wait to play and get out there again. After winning the last game … the feeling you get from winning you can't describe it," he said.

"The first 10 or 20 minutes [of Origin I] is the fastest footy I have ever played. It was intense but it was good. I felt comfortable being at the back and being in my position.

"My first half probably wasn’t my best half. The first 10 or 20 minutes took it out of me. I was pretty tired. I always wanted to play at the back for Queensland so when I got my opportunity I was ready to take it.

"I want to build on my performance from the last game and get better with my support play. There is always something you can be better at, like directing the boys around. They are the natural things that a fullback does that I can build on again.

It is fitting that Ponga should be the man of the moment ahead of the clash in Perth as he was born in the mining town of Port Headland in Western Australia.

"My old man has never spoken to me about his work or his stuff in the mines to be honest. I don't know too much,” Ponga said.

"I grew up mostly in New Zealand as a young fella and spent most of my teenage years in Queensland. I don’t know too much about Perth or WA. I’d like to get around and see the place." 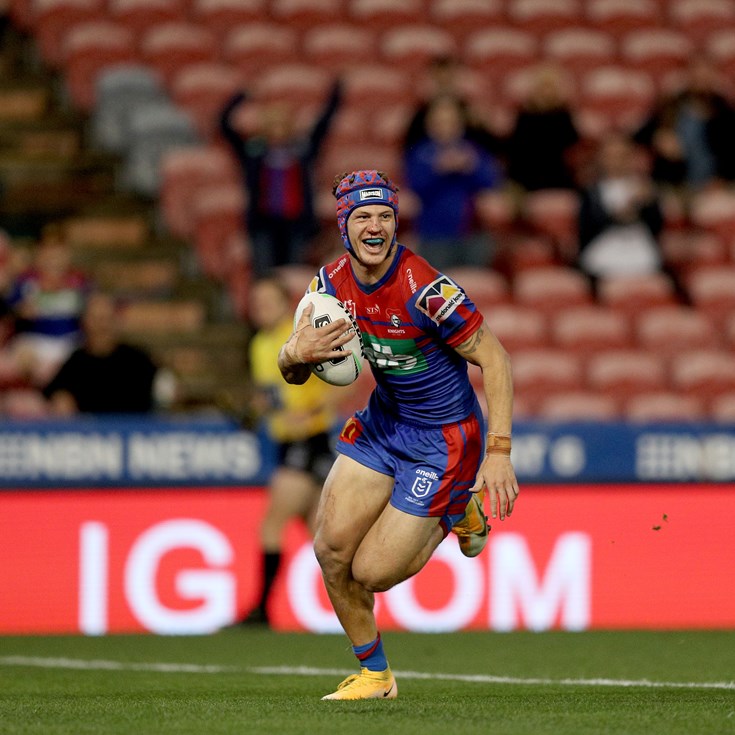 Busted nose, 'glint in the eye': Secret to Ponga's performance