Each week of the NRL season, the NSWRL.com.au staff writers will have their say on the round's best performing New South Welshmen. These are based entirely on the opinions of the writers and do not necessarily reflect the views of the NSWRL or the selection process for the Brydens Lawyers NSW Blues. Captaincy is awarded based on that week’s on-field performance and is not based on club captaincy or leadership qualities.

The Sydney Roosters No.1 went within a whisker of scoring the first try in the annual Anzac Day clash between the Roosters and the Dragons, narrowly held up over the line by a last-ditch, Zac Lomax try-saver. But the ever-present, tackle-busting fullback proved tough to contain, running for 229 metres from his 16 carries.

A 55th-minute try and three successful shots on goal earn the NSWRL Origin Pathways prodigy a start in the NSW Round 7 Team of the Week. Garrick and his Sea Eagles teammates showed their mettle after losing halfback and captain Daly Cherry-Evans early in the contest, the rising star showing nerves of steel when piloting conversions through the posts.

Playing in his familiar left centre role despite wearing the Roosters' No.6, Latrell Mitchell picked up from where he left off against Melbourne the week prior when facing the Dragons at the SCG. Mitchell scored 12 of his side's 20 points and was rock-solid in defence.

Back to his try-scoring best, Robert Jennings crossed the stripe twice for the Wests Tigers against the Gold Coast Titans in Tamworth. The double proved instrumental in the Tigers' efforts to overturn an early 14-0 deficit.

Well contained by the Warriors defence for the most part, Josh Addo-Carr took his chance to break through when it was presented – a perfectly-executed tap back to Cameron Munster who trailed through his own kick seeing the Storm over for a crucial first-half try. Along with the try assist, Addo-Carr ran for 170 metres, breaking seven tackles in his side's one-point win.

It was a case of cometh the hour, cometh the man for South Sydney in their clash with the Panthers in Penrith – Cody Walker's late line-break and try-assist for Dane Gagai sealing a dramatic 22-18 win over Ivan Cleary's side. Turning provider on that occasion, Walker crossed for a four-pointer of his own in the 56th minute of play.

The 18-time Blues representative took his game to another gear in the one-on-one duel with NSW-hopeful Mitchell Moses, sealing a much-needed win for the Knights with a decisive try in the 68th minute. Back to his running best, Pearce challenged the line 13 times and laid on a try for Lachlan Fitzgibbon.

Boom Broncos prop Payne Haas confronted a much more experiences Cronulla forward pack head-on, out-gunning True Blues Andrew Fifita, Matt Prior and Paul Gallen in his side's 29-6 win over the Sharks at Suncorp Stadium. The tireless No.8 ran for 150 metres from 14 carries, busting two tackles in the process. More than held his own on the other side of the ball too, racking up 31 tackles, missing only two.

As safe as a bank, Cameron McInnes chalked up 52 tackles in the Dragons' heart-breaking loss to the Roosters. Didn't challenge the line often, but when he did, looked dangerous.

Turned in a trademarked effort against the Eels in what was a must-win game for the embattled Knights. Klemmer ran for 202 metres from his 20 carries and made 32 tackles without a miss.

Earned man-of-the-match honours in his side's 10-point win over the Dragons at the SCG. In no-nonsense fashion, took the ball forward 16 times for a return of 159 metres and made 34 tackles.

The Sydney Roosters recruit crossed for his second try of the 2019 season and ran for 99 metres from his 12 carries. Broke two tackles with ball-in-hand and made 36 tackles on the Roosters' right edge.

The South Sydney lock only played 59 minutes against the Panthers but made them all count. Carried the ball 14 times for 119 metres – the most of any of the Rabbitohs' starting forwards. Broke five tackles and offloaded twice. Did his chances of an Origin call-up no harm in the four-point win.

One year and one day on from tearing his ACL against the Raiders at Brookvale Oval, the one-time NSW Under-20s rep oozed class in his return to play. Crossed for a double either side of the half-time siren and led the way minus the injured Daly Cherry-Evans.

The ever-reliable middle-forward earns a NSW Team of the Week berth for a fifth time in 2019. Played every minute in Manly's four-point win over the in-form Raiders. Ran for 149 metres from his 20 carries and registered a try-assist.

Scored a rare try in the Bulldogs' 12-point win over the Cowboys at ANZ Stadium. Didn't shirk the tough stuff, carting the ball forward on 14 occasions for 111 metres. Made 33 tackles but missed four, in an otherwise near-flawless display from the former Origin-regular.

One of the side's best in Brisbane's return to winning ways. Ran for 187 metres and broke three tackles, also made 14 tackles without a miss. 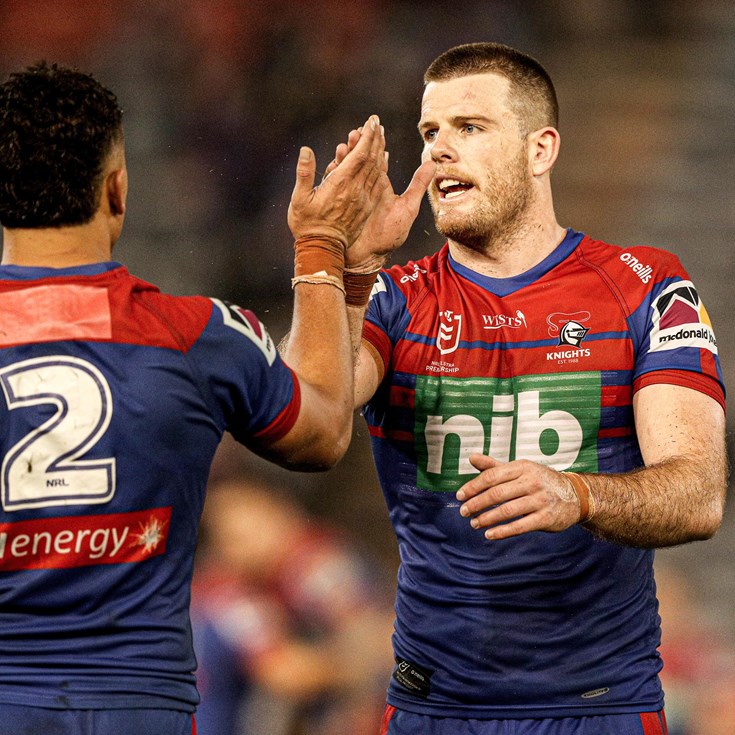