The fearless leader experienced his first major injury of his career which limited him to only 15 games.

Joining the Knights in December of 2017 from the Sydney Roosters, Pearce offered the Knights much needed experience and leadership in the halves and it didn't take long for Knights fans to fall in love with Pearce when he kicked the game winning field goal in Round 1 against Manly.

After leading the Knights to a strong start to the season, Pearce was forced from the field in Newcastle's 22-20 win against the Wests Tigers in Tamworth with a torn pectoral muscle.

Pearce missed nine games and the Knights were only able to register two wins in his absence.

In Pearce's limited time on the field, he scored two tries and had 13 try-assists.

He was also the NRL's leader in average kick metres with 413.1 metres per game.

Pearce surpassed 250 NRL games in the Round 22 clash against the Warriors and finished fifth in the Dally M voting.

In just 15 games, Pearce really did leave his mark on the 2018 season.

That was evident from the outset.

Pearce ran out onto McDonald Jones Stadium for the first time in front of 23,000 Knights fans alongside eight other debutants against the Sea Eagles.

After 80 minutes in the opening round, the score was locked, and the game went into golden point.

Both teams had opportunities to ice the game but it was the skipper who put the game to bed.

Baby Pearce… what’s in a name?

With one kick, he'd started a new era for the Club.

Newcastle beat Manly 19-18 and the new skipper was the hero. 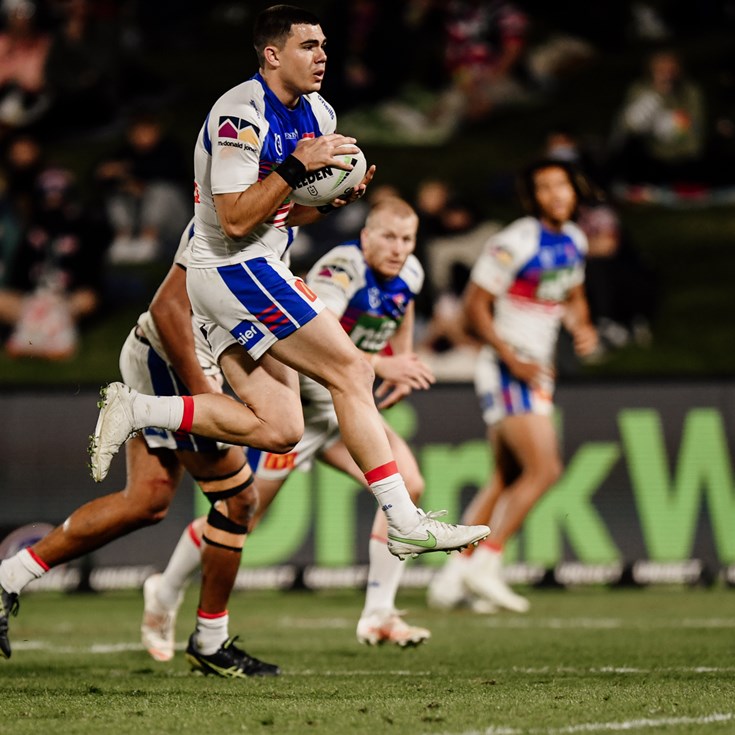 Gallery: The best snaps from the Roosters clash

Gallery: Best snaps from the loss at CBus