Newcastle forward Aidan Guerra has a simple answer on whether it's best to play Kalyn Ponga at fullback or five-eighth for the Knights.

"Just as long as he's in our side, I don't care where he plays," Guerra told NRL.com after his side upset Penrith 20-12 last weekend, silencing the Panthers Stadium crowd at their last home game for 2018.

The win was Ponga's first game in the five-eighth role, with coach Nathan Brown trying to rest his star's legs a little more after hamstring and ankle injuries.

"They were still pretty good in getting on him – taking him two at a time and taking his space away," Guerra said of the Panthers front men. "But it didn't really change what Kalyn did for us in the flow of our attacking sets.

"He's always played the kind of roving half role in attack even while at fullback. I just think play him anywhere, let him roam."

Guerra is enjoying a bit more freedom himself this season, shifting between second row and lock without neglecting his workload. He topped the tackle count at Panthers Stadium with 44 and he scored his third try in four games.

"I think it has helped with Browny putting me back on the edge. You don't get too many tries in the middle," he said.

"But on the edge there's a bit more space and a chance to run off the halves rather than running into big fellas.

"We spoke about eight rounds ago that I should switch from the edge to the middle to help out our defence; be another hard worker in the middle; and be a link-man more.

"It is tough work in the middle so he (Brown) has swapped in Mitch Barnett again. It's still hard defensively on the edge but I've just been lucky with being on the end of good moves."

Guerra isn't playing finals football this year – something a bit alien to him since he's been with the Roosters the past eight years, including winning the 2013 grand final.

But he came to Newcastle to put all that experience to good use and be a leader. Turning the tables on the top-four Panthers helps the Knights younger players greatly.

"For us, we spoke about these last club games as trying to show a bit of character and we certainly did that against the Panthers in defence.

"If anything it puts in the mind of the younger players what you need each week to win a football game.
We've been able to do it maybe twice this year for the whole 80 minutes. Today was the third time.

"And I'm sure the fans think 'Where has this been all year?' but we are a young side. The good thing is we're learning to bring that defensive mentality going forward every week and into next season as well.

"I know we let a few games go that we should have won this year, so that shows where we are as a side. But I can tell you we're building and growing really well."

And now for another hostile crowd as the Knights travel for a second week to Sydney – this time to face the Sharks at Southern Cross Group Stadium.

"It's always tough going to Shark Park. It's a little like Panthers Stadium. They are not easy and you're glad you only have to go there once a year," Guerra said.

"We will need to show up with more of the same defensive attitude we had against Penrith because the Sharks are strong physically and they like to ball play." 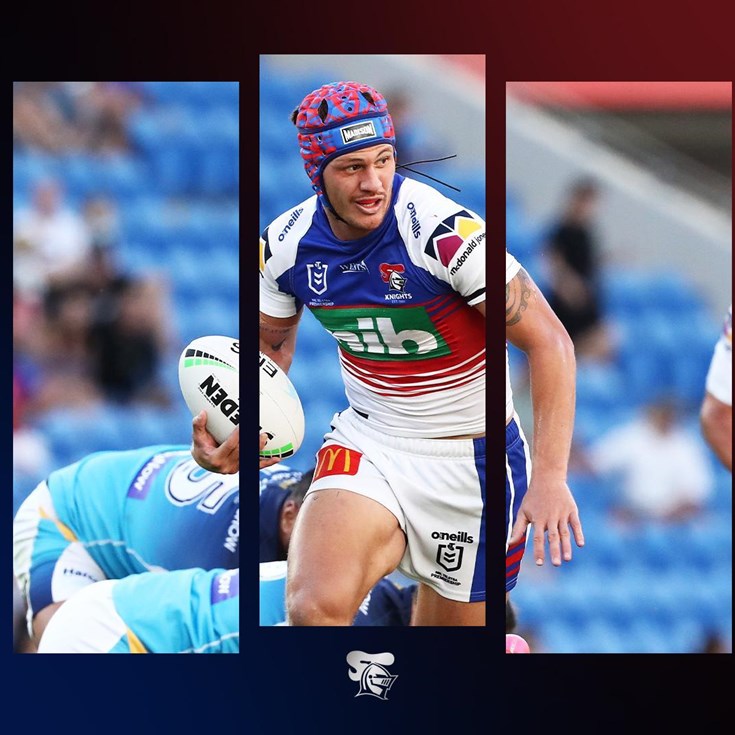