Billy Slater has seen plenty of young fullbacks come and go during his decorated 16-year career so when the Maroons legend declares Kalyn Ponga is more advanced than he was at the same age, you know the Knights No.1 is something very special.

Slater, who takes his final bow as Queensland fullback on Wednesday night at Suncorp Stadium, says 20-year-old Ponga has what it takes to wear the Maroons No.1 for the rest of his career.

The retiring 35-year-old also believes Ponga can follow in Darren Lockyer's footsteps and make a seamless switch to five-eighth.

"We are different fullbacks but Kalyn has had a incredible amount of try assists and line break assists to his game, whereas when I came in I was all runner," Slater said.

"I was scoring tries and making line breaks but I had to work on setting up players around me. As I've got older I am more focused on that than my running game."

There are a lot of similarities between the way the way Slater and Ponga's Origin careers have started.

Both debuted for Queensland as 20-year-olds. In Slater's second game he scored a stunning chip and chase try to announce himself as a freakish talent. Ponga's Origin debut, out of position, was as accomplished as anyone had seen in that arena.

NRL.com asked Slater whether Ponga could stay in the fullback position for Queensland for the rest of his career.

The Lockyer that Slater sees in Ponga

"Why not? For sure he can. There are going to be challenges along the way. There is going to be another Kalyn Ponga step up too," Slater said.

"Good players come along all the time and challenge you. You have to continue to evolve and continue to want to improve and work hard to improve.

"Complacency is what can bring anyone unstuck, especially when you become successful when you are young and there is a lot of hype around you.

"But I don't see that in Kalyn. We know he has all the talent in the world and we see what he is doing on the field, but off the field he is mature and respectful."

Slater said Ponga was the obvious choice to inherit his mantle "at the moment" and outlined why.

"For a young guy that has only played 20 NRL games he is already a pretty well-rounded fullback and doesn't have too many chinks in his armour," Slater said.

"Cameron Munster was very much the same when he came into first grade. Kalyn is good defensively and he has got a high involvement and he makes himself dangerous. As a fullback you've got to make yourself dangerous."

When Slater was coming through as a fullback for Queensland there was Rhys Wesser, Karmichael Hunt and Matt Bowen all in the frame.

In the immediate future Ponga, Valentine Holmes and Moses Mbye will all stake their claims.

"Every position is competitive and there are no walk-up starters in any position for a long period of time, especially at representative level," Slater said.

"I started by playing three games on the wing when Rhys Wesser was fullback and then I got an opportunity to play fullback. I played in teams with Karmichael Hunt where I started at fullback and he came off the bench, and we flipped that around a couple of times.

"Fullback is a position where you get a lot of freedom so a lot of people want to play there, which makes it super competitive.

"The next opportunity Kalyn is going to get to play fullback for Queensland is in 12 months time and that is a long period of time. It wasn't so long ago that Cameron Munster was going to be the next Queensland fullback, and now he is playing five-eighth.

"For those young guys [Ponga, Holmes and Mbye] it is all going to be about developing their game and becoming the best player in whatever team they are in."

When Slater was coming through, building his game and making himself a complete footballer in his position was what he focussed on.

"I wasn't a great defender, probably still aren't, so I had to work on that a lot," he said.

"I had to work on my passing game and it took a lot of time and training. I was always a natural runner and wanted to be around the football so made the transition to fullback easier."

Ponga's game is similar to Lockyer's in some respects which is why if the Maroons need a new five-eighth of class down the track he could well slot in there.

"I'm not saying they are the same player but I can see in Kalyn's game that ability to get in the front line and set people up like Locky," Slater said.

"You look at the ratio of tries to try assists in his game and it is heavily in favour of try assists. His game is suited down to to being a running five-eighth but right now he is doing a fantastic job at fullback."

It took Slater five years from his Origin debut in 2004 until he sealed the deal as a regular starting fullback in 2009 after missing the 2006 and '07 series through suspension and a broken eye socket.

"It came to me as a 20-year-old as well when I debuted for Queensland," Slater said as he reflected on his own career and its lessons.

"When you get something taken away from you...it burns a bit of a fire in your belly. I had a taste of it and then missed out on it for a couple of years.

"Game two in 2004 [when he scored his famous try] certainly helped me feel like I belonged even though we didn't win the series. When you play well at Origin level you feel like 'hey I am at home here'.

"But 2008 was the first time I had played my position and really felt like I owned it, and then it went from there." 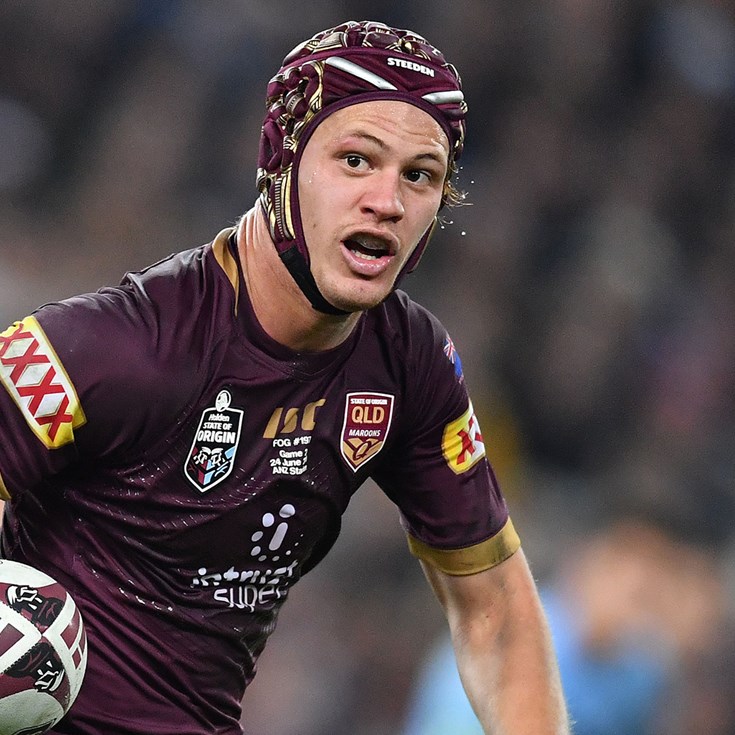