One team playing to stay in the top eight race, the other playing for pride.

Newcastle coach Nathan Brown knows better than anyone this is a game his team has to win and will be expected to win. And with expectation comes pressure, but that doesn't mean the Knights shouldn't embrace the moment and take care of business against a team that appears to be going nowhere fast.

Brown has a few rep players to check on before finalising his side to face the Bulldogs, none more so than the electrifying Kalyn Ponga.

With six wins from 15 games, the 12th-placed Knights know a loss would effectively bury their finals aspirations.

The Bulldogs have farewelled Moses Mbye, leaving coach Dean Pay with the difficult task of having to replace arguably his best player this season.

After trying hard for three months and having virtually nothing to show for it, the Doggies (3-11) hit rock bottom a fortnight ago, playing with no passion or purpose in an embarrassing 32-10 home loss to the Titans.

Pay has to somehow get his team firing or the wooden spoon beckons.

Key match-up: Knights halves Connor Watson and Jack Cogger are gradually forming a decent combination and should go into this clash believing they have an edge over Jeremy Marshall-King and debutant Lachlan Lewis, the nephew of Immortal Wally Lewis. Kalyn Ponga is young and fit enough to back up after his eye-catching Origin debut, but it's a perfect opportunity for Watson and Cogger to build self-belief and confidence against a team that is playing with little of either.

For the Knights to win: Given that they still have an outside shot at a top-eight finish, the Knights have a little more to play for than the Dogs. That added incentive should ensure they turn up with the appropriate attitude and intensity, but they still have to go out execute the game plan. The Knights need a dominant performance from their forwards and, as usual, a sprinkling of Ponga magic to chalk up their seventh win of the season.

For the Bulldogs to win: It's up to first-year coach Dean Pay to haul his team off the canvas after their dismal effort against the Titans and try to salvage something from a disappointing season. Mbye's departure might actually galvanise the team in the sense that some of the younger players have to step up and take more responsibility on the field rather than waiting for someone else to make things happen.

And another thing: All this talk about the Blues building a dynasty sounds good in theory, but let's not forget Kalyn Ponga is only 20 and his impressive debut in Origin II should be a sobering warning for all NSW fans not to get ahead of themselves. Ponga played 53 mins off the Queensland bench, finishing with 10 runs for 108 metres, 29 tackles and five missed tackles. The Blues certainly have a very capable group of young players who could enjoy a period of success, but they don't have Ponga – a bona fide superstar in the making who has the talent to own the Origin stage for the next decade.

Just one change for the Knights with Jamie Buhrer called onto the bench at the expense of Luke Yates. Pasami Saulo and Nick Meaney were cut from the squad 24 hours before kick-off. Luke Yates, Nathan Ross and Brock Lamb were omitted an hour before kick-off.

The Bulldogs are 1-17 and playing their first game since the exit of Moses Mbye and Aaron Woods. Will Hopoate moves to fullback with Kerrod Holland starting in the centres. Lachlan Lewis debuts at five-eighth and Jeremy Marshall-King shifts to halfback. Rhyse Martin gets a recall in the second row for Raymond Faitala-Mariner (broken hand). Marcelo Montoya shifts to centre and Brett Morris returns on the wing. David Klemmer starts at prop for the departed Woods. Clay Priest was omitted on Friday night, while Asipeli Fine, Matt Frawley and John Olive were cut an hour before kick-off. 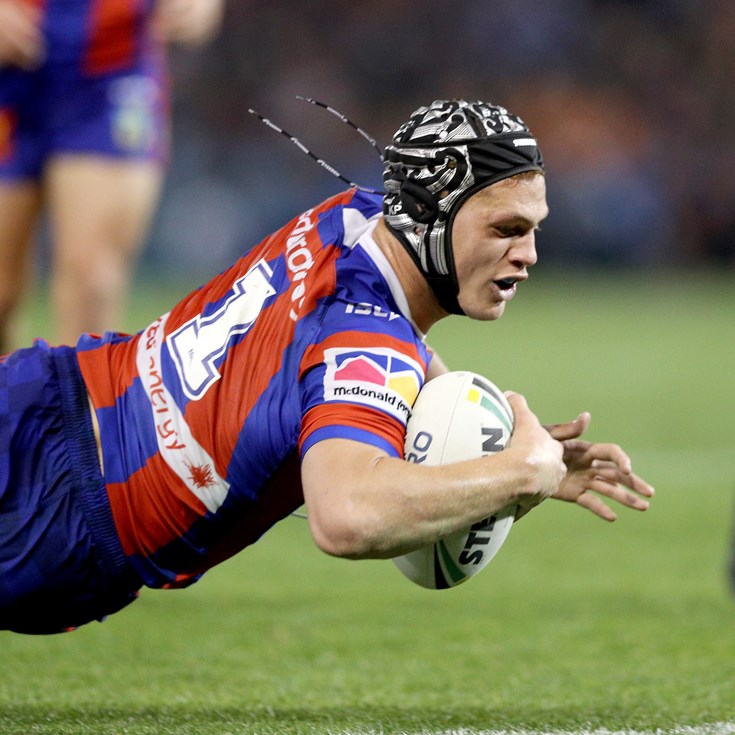