After breaking a four-game losing slide with the previous week's big win over Parramatta, the Knights proved it was no fluke when they almost upset the Roosters last week.

The 18-16 loss left them with a 6-8 record but shouldn't have dented their renewed confidence. While the Knights obviously have work to do if they are going to sneak into the finals, at least Nathan Brown has them believing again that they can compete with anybody.

They were flogged 40-14 by the Storm in round six and should be eager to show the reigning premiers they learned some valuable lessons from that meeting.

Melbourne marched to their eighth win of the season last week over the Broncos but will have to again manage without fullback Billy Slater after he was again ruled out with a hamstring injury. At full strength they are totally capable of defending their crown, but they will certainly need Slater when push comes to shove in the big games.

Of course, the presence of Cameron Smith makes Melbourne a serious threat any time, any place. The Storm should take care of business but they probably won't rack up 40 this time around.

Key match-up: It was supposed to be a case of the master against the very skilled apprentice with Billy Slater squaring off with Kalyn Ponga. Slater is arguably the game's greatest all-time fullback, while 20-year-old Ponga is destined for greatness. Slater has had a stellar Origin career and Ponga will almost certainly make the Maroons' fullback position his own for the next 10 years when Slater steps aside after the 2018 series. Slater's omission for this game pits Ponga against another talented young fullback in Jahrome Hughes with a chance to press his claims for an Origin debut in Sydney.

For the Knights to win: Now that they have got their defence working again (22 points conceded in their past two games), the Knights have to be even more switched on in that area against the reigning premiers, especially whenever Cameron Munster has his hands on the ball. If they can keep the Storm below 20 Ponga might have enough tricks up his sleeve to create some point-scoring opportunities.

For the Storm to win: As long as they don't underestimate the Knights and expect an easy afternoon (which is unlikely with Cameron Smith steering the ship), Melbourne should chalk up two valuable competition points. They need to keep close tabs on the mercurial Ponga and be ready to back up any half-breaks by Smith and Munster.

Knights Stat Attack: Newcastle's defence has struggled when performing in front of their home crowd, having conceded 113 points in three consecutive losses at McDonald Jones Stadium. Coming up against an outstanding attacking team in the Storm, the Knights will need to tighten up their defence if they are to be a chance of an upset.

Storm Stat Attack: Melbourne have the upper hand going into their clash against the Knights, having won the past five encounters between the teams.

And another thing: NSW fans breathed a sigh of relief when Queensland selectors decided to leave Kalyn Ponga out of the Origin series opener. Ponga is making a compelling case for Dally M player of the year honours is his first full season in the NRL, leading all players in tackle breaks, line break assists and kick return metres. As far as playing in this year's Origin series goes, what's that saying 'if you're good enough you're old enough'?

Jacob Lillyman is out with an abdominal strain, replaced on the bench by Sam Stone. Jamie Buhrer's season-ending ACL injury sees Luke Yates come onto the interchange bench in the only other change to the side which went down to the Roosters last Saturday. Nick Meaney was cut from the reserves on Saturday. Brock Lamb and Brent Naden were omitted an hour before kick-off.

Billy Slater is out again with a troubling hamstring injury, replaced at fullback by Jahrome Hughes. Young Tonumaipea has been omitted an hour before kick-off, along with Patrick Kaufusi. Joe Stimson has been promoted to start in the second row, in another late switch, with Ryan Hoffman to begin the match from the interchange. Centres Curtis Scott and Will Chambers return from suspension. Tim Glasby moves from lock to prop to replace Jesse Bromwich, who is set to miss 4-6 weeks with a torn hamstring. Cheyse Blair was cut from the reserves on Saturday. 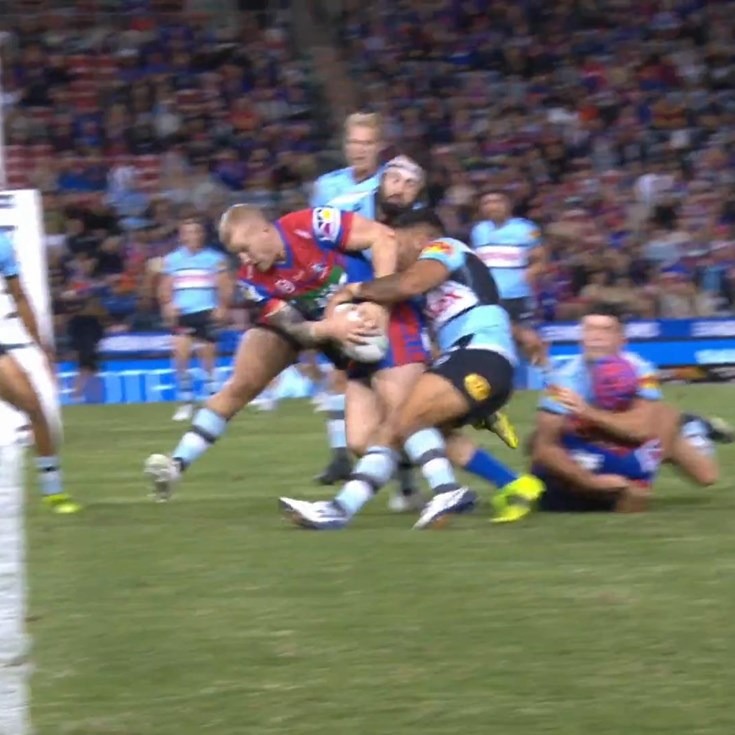