For the NRL’s ANZAC Round this Saturday, the nib Newcastle Knights have been given extra motivation after a visit from Australian defence personnel.

Flight Sergeant K, who has been a senior airman for 10 years and has been awarded a commendation for gallantry, is due to be deployed on ANZAC Day.

He spoke to the team on Wednesday about making the ultimate sacrifice.

“It is all about matching the similarities between the two groups, they’re a team, we’re a team,” Sergeant K told the players.

“We focus on team versus self, being able to relate that to what they do out on the field and to work as a team, because everything should be about the team.”

Whilst both jobs are vastly different, the message is the same… Aspire to inspire and put the team first. 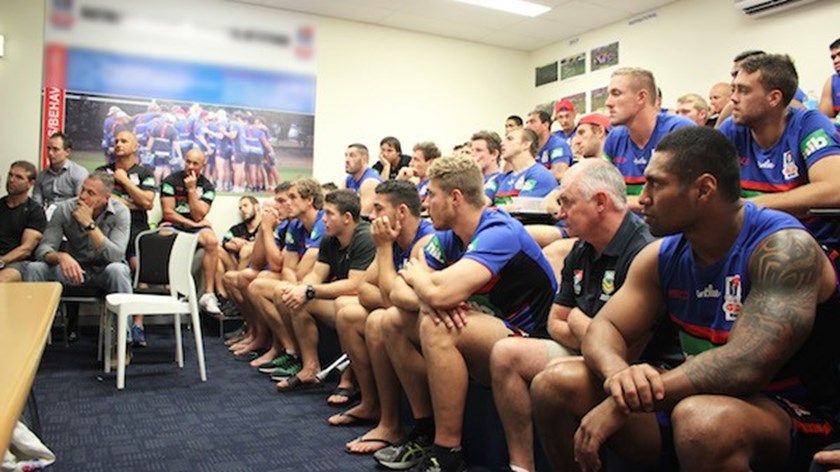 “The leadership is a huge part of that, you don’t have to be the big yelling leader but every positive step is a step of leadership,” said Sergeant K.

“We don’t have an easy day in our team, we just want to pass that over to these guys, putting it all out there every day is your best chance of success.”

Through the season defence personnel will be running various training sessions with the Knights to help build their resilience as a team under physical duress.

“The performance coach will be running with that and we’ll be able to give them snippets and insights into how this translates into the real world.

“You can get very comfortable in a very specific place, we like to change things up even for ourselves, we rarely train in the same place.”

The Knights are in Townsville to take on the Cowboys at 1300SMILES Stadium on Saturday. There will be an ANZAC ceremony before the 5.30pm kick-off.

AOB and Ponga on Broncos defeat and Bradman injury