It's been a rollercoaster ride of a season so far for the NYC Knights. With some memorable results and tense encounters that went down to the wire, we look back at the best (and worst) of 2016 to date.

It was a strong start to the season for the young Knights with winger Matt Soper-Lawler the star of the match with three tries.

Halfback Jack Cogger was impressive as well, the 18-year-old pulling the strings from the middle of the park to ensure a comfortable victory.

The Knights came crashing back to earth in their second match of the 2016 season, but there were still some positives to be taken.

Sione Mata’utia scored a try in his first game of the season, while a certain Cory Denniss put in a performance that earned him a first grade debut the following week.

It was the team’s first game at Hunter Stadium for 2016, but unfortunately it was another loss for the red and blues.

While the Knights started strongly and in-form winger Soper-Lawler registered two tries, the Raiders proved too strong in the end.

Coach Todd Lowrie demanded more from his team after the game, and the young players duly delivered in the following weeks.

It loomed as another tough away trip for the Knights but panned out as a comfortable and confident win to start off a long run of positive results.

Props Jamayne Taunoa-Brown and Tyrone Amey were outstanding with their work through the middle, while hooker Joey Morris scored two tries from dummy-half.

It was a four day turnaround for the young Knights, but that didn’t stop this match from being one of the most entertaining of the season.

Ken Tofilau and Dennis were on fire in the first half, catapulting the Knights to a 30-8 lead.

It was the Storm’s time to dominate in the second half though, and they scored 18 unanswered points to make it a nervy finish to the game.

A 40 metre try from Gudgeon decided the contest in the end, and the Knights walked away with the two points.

With the Novocastrians leading by 20 points at one point in the second half, this was a game they definitely should have won.

A desperate Tigers outfit came back from the death though, and the Knights were left to rue a missed opportunity.

The team got back into the winners’ circle with a thrilling late win at Suncorp Stadium.

While the Broncos started the match strongly with a 12-point lead, a length of the field try from fullback Nick Meaney and a field goal late on from Cogger ensured the red and blues came away with the win.

Dummy-half Morris again starred with two tries, while Cogger never lost his composure in the middle.

It was another close win for the Knights as they got off to a slow start at Hunter Stadium.

Morris again starred with two tries, while Soper-Lawler got back on the try-scorers sheet after a lean run.

It was late tries to Meaney and Lamb that decided the result though, and put the young Knights near the top of the ladder.

With mainstay half Lamb stepping up for his first grade debut the red and blues were unable to get over the line against a strong Roosters side.

The Tricolors ran out to an early 18-0 lead, and while the Knights showed some character to hit back with two tries of their own, in the end the margin proved too much.

It was back to winning ways at Hunter Stadium in Round 10 despite the absence of both Lamb and Cogger, the latter making his first grade debut.

Dean Kouka-Smith was also strong out on the wing with two tries.

The NYC Knights were again plagued by a slow start to run out eventual losers to the Tigers at Leichhardt Oval.

Despite trailing by 26 points at one stage the Knights did make a fight of it to have the scores sitting at 28-26 with two minutes left on the clock.

A very late try to Ray Stone saw the Tigers get the win by four points though, and the Knights were left to rue their sluggish start.

It was a see-sawing game where neither team really deserved to lose, but the Knights came up with the clutch play seconds from time when Gudgeon found enough space in the corner to score.

Some great goal kicking from McNamara sealed the win, and dramatic celebrations followed.

It was a match to forget for the young Knights against one of the competition favourites.

It was another close win at home that put the demons of that Round 13 thrashing to bed.

Against a monster Warriors pack 17-year-old Tom Starling put in a coming of age performance from dummy-half, racking up 51 tackles and scoring from a 40 metre run.

With a little more than half the season done, it put the young Knights in 7th position. 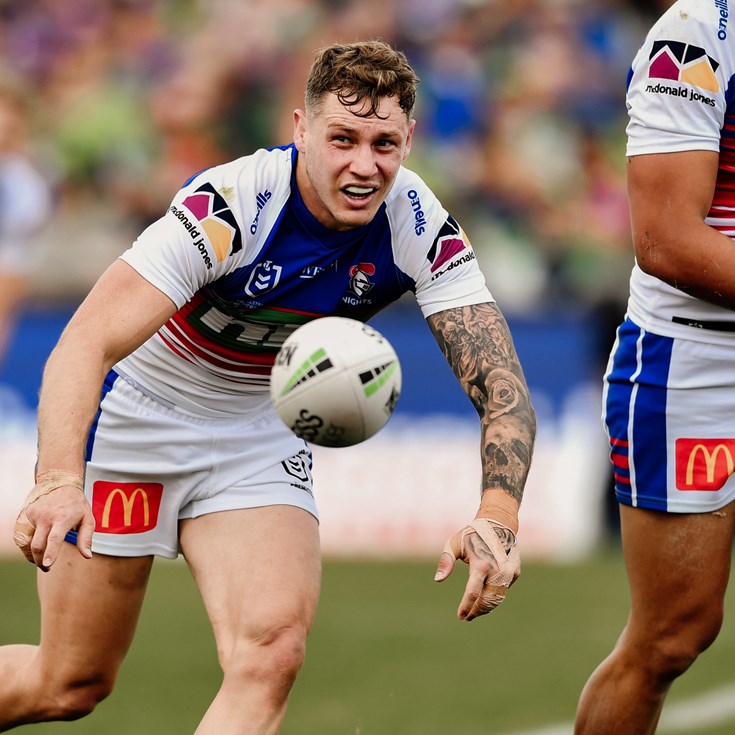